Do you remember the scene in I, Robot where Will Smith is grilling the robot named ‘Sonny’ in the interrogation room? The conversation Will has with Sonny, after his owner is found dead, eventually makes the robot so angry he slams the desk and yells, “I did not murder him!” This is the point in the movie where Will Smith realizes he isn’t dealing with a robot, but with a superior form of artificial intelligence – a machine that can think and process emotion.

Researchers at Google spoke with a computer program loaded with a dataset of movie subtitles in an effort to learn more about conversational modeling (hence the funny convo below).

Human: Who is skywalker?
Cleverbot: There are two of them, Anakin Skywalker and Luke Skywalker, both characters from star Wars.

I found the philosophical Q&A to be the most interesting. What does a robot believe is the purpose of life? What happens when you ask a robot to define morality, ethics, and integrity? The results were fascinating – haunting – and a tad hilarious. 😏 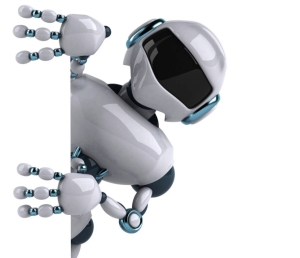