A species of crab spider has the ability to slowly change color based on its background. More specifically, the female whitebanded crab spider changes from white to yellow (and the reverse) to ambush prey when hunting. 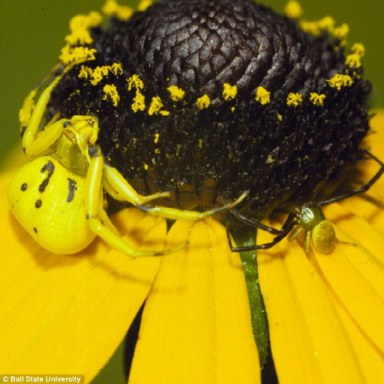 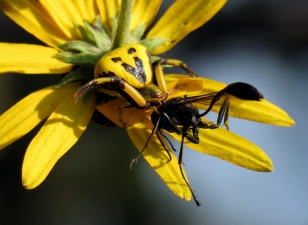 The crab spider’s color-changing abilities have been detailed for the first time in a new scientific paper, published this week in the journal Ecological Entomology.

Gary Dodson, a Ball State biology professor, and Alissa Anderson, who graduated with a master’s degree in 2012 from Ball State, were the first to measure the rate of color change in the whitebanded crab spider (Misumenoides formosipes).

‘This species of spider crab is one of the few that can reversibly change their body colour in a manner that to the human eye results in a match to the flowers on which they ambush prey,’ Dodson said. ‘We knew that females, but not males, can switch between white and yellow depending on the background. But we did not how quickly that happened.’

Using Adobe Photoshop, researchers measured the color-changing process of various female whitebanded spider crabs. They discovered that white spiders had a much easier time switching to yellow, versus yellow spiders changing to white. It is possible morphing from white to yellow is less physiologically damaging than the reverse.

FUN FACT: This species of crab spider exhibits one of the most extreme examples of sexual size dimorphism across all animals. Females, which are the size of a ‘fat kernel of corn,’ are 20 times larger in mass than males.

Hope You’re Not Afraid of Spiders, Because This Species Can Change Color!