Scientists in Indonesia just discovered a new mammal and they named it the hog-nosed shrew rat. Seems a little harsh, right? But I guess that’s to be expected when you find a rat with a little piggy face. 🐀🐷

According to the BBC, the unusual creature was discovered on Sulawesi island by researchers from Australia, Indonesia and the United States. While the hog-nosed rat (Hyorhinomys stuempkei) shares many traits with other rats in the area, there are a few features that are unique to the species. It has huge ears for an animal its size, a long hog-like nose with forward-facing nostrils, and flat nails.

It also has ‘very long urogenital hairs.’ That means it has long pubic hair – a lot of it. I don’t know what you want to do with that information, but its written right there in the report. 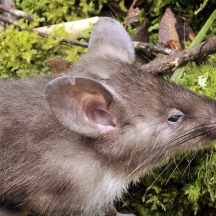 Morphologically, the hog-nosed rat is most similar to a group of endemic Sulawesi rats known commonly as “shrew rats.” These are long faced, carnivorous murines, and include the genera Echiothrix, Melasmothrix, Paucidentomys, Sommeromys, and Tateomys.

Discovery of this new genus and species brings known shrew rat diversity on Sulawesi to 6 genera and 8 species. Researchers believe the physical diversity among these animals is ‘remarkable’ considering the small number of species currently known. The findings were published in this month’s Journal of Mammalogy.