Scientific American shared a list of the top 10 most interesting new species discovered last year. The fascinating list was published by the International Institute for Species Exploration (IISE) at the State University of New York College of Environmental Science and Forestry on May 21. Explore the new creatures below!

SOLITARY BROMELIAD: Tillandsia religiosa, a solitary flowering plant with rose-colored spikes and flat green leaves, grows in rocky terrain in Morelos, Mexico. T. religiosa has long been known to native people of the region, who incorporated it into nacimientos (altar scenes depicting the birth of Christ) at Christmas. Yet scientists have only recently described it. Photograph by A. Espejo

BONE-HOUSE WASP: A wasp found in the Gutianshan National Nature Reserve in eastern China, Deuteragenia ossarium has gained notoriety for its morbid nesting habits. It builds its nests in hollow plant stems made of cells separated by soil walls, with each cell hosting an individual egg. To prepare the nest, it kills and deposits a spider in a cell as food for the larva when it hatches, lays an egg in that cell, then repeats the process for each consecutive cell. The wasp fills the last cell with up to 13 dead ants, which serve as a chemical barrier to the nest by camouflaging it with the odor of decay. Photograph by Merten Ehmig

WALKING STICK Measuring at 23 centimeters long—yes, as long as a human forearm—Phyganistria tamdaoensis is a member of the family of “giant stick” insects, the largest insects in the world. The creature’s stick like body makes it a master of camouflage, which helps explain how it eluded discovery in its habitat in Vietnam—until now. Photograph by Jonathan Brecko

WHITE-SPOTTED PUFFERFISH: In 1995 scientists described an underwater phenomenon akin to crop circles on the sea floor off the coast of Japan’s Amami-Oshima Island. Marine exploration led to the discovery that these large geometric designs are actually the nests of a pufferfish known as Torquigener albomaculosus. The fact the culprits who made them eluded scientists for 10 years earned T. albomaculosus a place on the list. Male pufferfish build these intricate nests by wriggling around in the sand on the ocean floor. The nests are intended to attract females and designed to minimize ocean current at the center of the nest to protect the eggs. Photograph by Yoji Okata

PHOTOGENIC SEA SLUG: This gastropod, Phyllodesmium acanthorhinum, sports vivid shades of blue, red and gold. Its discovery helped scientists understand the symbiosis that occurs in members of this genus. Algae called zooxanthellae typically exist symbiotically with coral, where they exchange nutrients via cycles of respiration and photosynthesis. In sea slugs a type of tri-species symbiosis occurs when algae residing in a slug’s gut draw nutrients from coral its host consumes, in turn furnishing the slug with the nutrient products of photosynthesis. Photograph by Robert Bolland 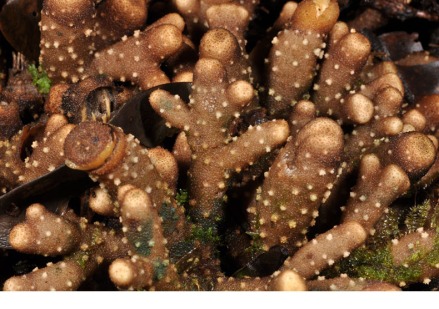 CORAL PLANT: Found only on the southwestern slopes of Mount Mignan in the Philippines, Balanophora coralliformis is an endangered plant that parasitizes the roots of other plants. Its rough, elongated, repeatedly branching, aboveground tubers set it apart from other species of its kind. Photograph by P.B. Pelser & J.F. Barcelona

INDONESIAN FROG: Limnonectes larvaepartus is a small fanged frog found in forests on the island of Sulawesi in Indonesia. It is unique in that the female’s eggs are fertilized internally and she gives birth to live tadpoles. Of the 6,455 known species of frogs, fewer than a dozen undergo internal fertilization. And apart from this new species, all frogs either lay eggs or give birth to froglets. Photograph by Jimmy A. McGuire

CHICKEN FROM HELL Anzu wyliei is a bird like dinosaur that inhabited North American 66 million years ago. Because its relatives are chicken-size and the fossils were discovered at the Hell Creek Formation in South Dakota, A. wyliei received the nickname “chicken from hell.” Its genus name, Anzu, derives from the feathered demon “Anzû” of Babylonian mythology. Illustration by Mark A. Klingler

THE X-PHYLA: Residing on the sea floor off the coast of Australia, Dendrogramma enigmatica is notable for its tiny size and mushroomlike shape. It resembles members of the phyla Cnidaria (jellyfish, corals, sea anemones and hydras) and Ctenophora (comb jellies) but lacks key evolutionary traits of both. Consequently, scientists have proposed that D. enigmatica might be a member of its own new phylum. Photograph by Jørgen Oleson

CARTWHEELING SPIDER Meet the arachnid world’s top gymnast. Cebrennus rechenbergi is a hunting spider found in the deserts of Morocco. This spider is the only species to “cartwheel,” which allows it to move two times faster than running when escaping from danger. Its unique movement inspired a biomimetic robot that walks and rolls. Photograph by Ingo Rechenberg, Technical University Berlin