A baby female chimpanzee by the name of Keeva, born to the Maryland Zoo in Baltimore on March 12th, has been given the best Mother’s Day present – a new surrogate mom!

Once the Maryland Zoo realized Keeva’s birth mother couldn’t care for her, they teamed up with Tampa’s Lowry Park Zoo to find a surrogate mother to raise her properly. You can view the big announcement on the Maryland Zoo’s website and Facebook page 🙂

The tiny primate was born at 2.6 pounds to first time mother ‘Carole,’ who has been with the chimp troop at the Maryland Zoo for 27 years. Unfortunately, Carole could not care for Keeva properly, and the Zoo was forced to make a tough decision.

“The birth seemed to be without complication and the baby appeared to be healthy,” stated Mike McClure, general curator at The Maryland Zoo. “However, it soon became apparent that Carole was not adapting to motherhood appropriately and we made the difficult decision to remove and hand-rear the baby while searching for a suitable home with a nurturing surrogate.”

Maryland Zoo staff felt it was important to familiarize Keeva with the sights, smells, and sounds of the troop. The infant spent several weeks in a behind-the-scences section of the Zoo’s Chimpanzee Forest, receiving round-the-clock care. 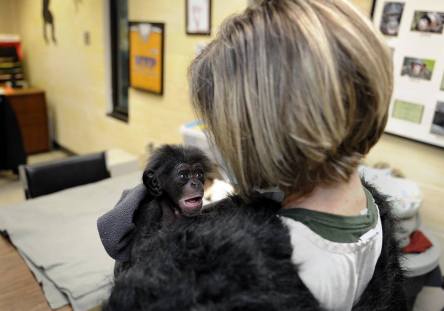 While Keeva was experiencing her first few weeks of life, the Zoo knew they needed to find her a surrogate. They worked with the Chimpanzee Species Survival Plan (SSP) of the Association of Zoos and Aquariums (AZA) to find an adult female chimpanzee ready to take on the task. Luckily, they found an experienced surrogate named ‘Abby.’

“We know Abby has the instincts and skills to raise a baby chimp – she has been successful twice before,” noted Lee Ann Rottman, general curator of Tampa’s Lowry Park Zoo. “We have every reason to believe that she will raise Keeva as her own, when given the opportunity.”

Keeva is now 5 pounds, can hold her head up, has started to speak, and is beginning to teethe! But, it will be 4-6 months before she is introduced to Abby. She will be integrated slowly, as chimpanzees live in complex social groups with a strict hierarchal structure. We wish her the best of luck.

Humans tend to have a soft spot when it comes to chimpanzees. This is most likely due to the fact that they are our closest relatives, sharing 98 percent of our genes! Sadly, these great apes are endangered and still threatened by poachers, disease, and habitat destruction.